6 Common Menstrual Disorders You Need to Know About 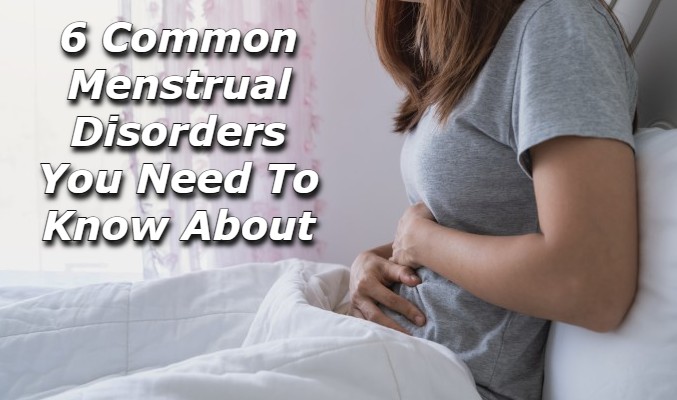 6 Common Menstrual Disorders You Need to Know About

Menstrual disorders are a common, yet still a little-understood topic. But it’s important to know what they are and how you can get treatment.

Here are some common menstrual disorders that every woman needs to know about:

Dysmenorrhea is a condition that causes painful cramps and contractions in the period. It is quite common, and it can affect women of all ages. Although, it is more common among teenagers and young adults. The pain can be severe enough to interfere with your ability to work or perform other activities. It may also cause you to miss school or work and result in missing appointments or being late to appointments.

PMS is a constellation of physical, emotional, behavioral, and psychological symptoms that occur during the two weeks before your period begins every month (or right after it ends). These symptoms range from irritability and mood swings to cramping so severe you have difficulty walking or lying down. There’s no one cause for PMS — it’s believed to be a combination of genetic predisposition combined with hormonal changes and environmental factors (including stress).

Heavy bleeding is a common symptom of menstrual disorders, including polycystic ovarian syndrome (PCOS), endometriosis, and uterine fibroids. Heavy periods are the result of excess blood loss that leads to anemia. It can also be caused by low iron levels or hormonal changes that affect the lining of the uterus (endometrium).

“Amenorrhea” refers to the absence of menstrual periods or an absence of menstrual bleeding for more than three consecutive months in a row. Amenorrhea is considered a common problem among women and is often caused by physical or hormonal factors such as stress, anemia, pregnancy, and medication use. The most common cause of amenorrhea is an underactive thyroid gland due to hypothyroidism. However, other causes include chronic illness or pregnancy.

Oligomenorrhea is when you only have light or infrequent bleeding. This condition is often seen in women with the polycystic ovarian syndrome (PCOS), but it can also be caused by other causes such as medication side effects or hormonal imbalances.

The premenstrual dysphoric disorder is characterized by severe mood changes and symptoms that occur before menstruation and during the first few days of menstruation. Women with PMDD have severe mood changes that are not caused by the hormonal change in their cycle. Symptoms include irritability, anxiety, depression, anger, sadness, and physical symptoms such as headaches, aches, and pains. Women with PMDD also may have an increase in appetite during this time.

These are some of the common menstrual disorders every woman should know about. If you’re experiencing any of these problems, want a regular checkup, or have questions you need answers to, reach out to your OB-GYN today.